It was past 6 a.m. when I arrived in Maragusan. A landmark with a message that reads, “Welcome to Maragusan, the summer capital of the Davao region”greeted me. Baguio in Davao? I was surprised. Maragusan is located in Compostella Valley’s highland region. A mountain range surrounds this small town.

Looking for something unusual wasn’t hard, as Christine Dompor, the Provincial Tourism Officer, took me to the town’s favorite hangout. Haven’s Peak is a resort nestled on Tarago Hills facing Maragusan. It offers a panorama that would keep the visitors coming back. I was lucky to witness it.

Mist slowly moved to my direction. The town was nowhere in sight after half an hour. It was like what happened to a Californian fishing town in John Carpenter’s “The Fog.” An otherworldly sight it was.

Henrich Nalzaro, a local government unit officer, was delighted at my reaction. He remarked matter-of-factly that the mountains hid numerous waterfalls. He invited me to see Pyalitan Falls, which is several kilometers away from the town.

About 40 minutes later, we trek on a muddy footpath. Here and there were plants and trees that were only found in Mindanao. It took us nearly 30 minutes to reach a two-tier falls. The first one was about a few feet high, while the second has a drop of 10 feet.

Nalzaro told me that we must climb up in able to see Pyalitan. Ascending the rocky slope besides the first falls wasn’t hard, but it wasn’t the case with the second.

He pointed to the two boulders located a few meters away from the top of the second falls. We needed both rope and bamboo to able to pass through the small opening between it. With a little help from Dompor’s staff, I managed to bring my overweight body up there.

We saw another two-tier waterfall, but this one was more dramatic. The first falls was about 15-feet high, while the second one was probably 150 feet in height. Fatigue was setting in, but we couldn’t stop. We crossed a rocky creek and climbed another rocky slope to be able to get close to the grandest of the four falls.

Pyalitan looked like a mini version of Venezuela’s Angel Falls. The sky seemed so close. If ecstasy is about elevation, then this huge waterfall is the tops.

Descending wasn’t difficult, as I used my butt to keep my feet from slipping. We were back to starting point about an hour later. As we passed by the mountain range, all I could think of was the waterfalls up there. How I wished I could stay there.

The Philippines as a travel destination 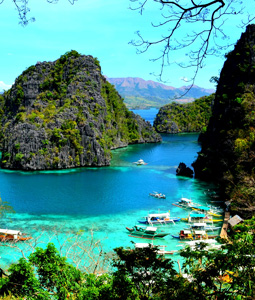 A seaside destination par excellence, the Philippines consist of no less than 7107 islands, some very extensive as Luzon and Mindanao, others are simple sandy uninhabited islets. The Philippines is a destination called paradise for more than one reason!

What to do in the Philippines 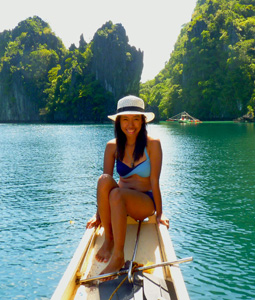 The Philippines is a remarkable country made up of more than 7,000 islands. It is a country with a fast growing population and has a whole array of natural elements to contend with. There are 20 active volcano’s throughout the islands and the area is also prone to typhoons and other harsh weather conditions. The Philippines are not only about the beaches and relaxation. From kayaking to kitesurfing, from canyoning to caving, the adrenaline junkies are spoiled for choice. The Philippines stands out from the Asian Southeast geographically, but also when it comes to religion and culture...